Delivering Diversity and Inclusion In Policing

techUK was delighted to welcome members from across its Skills, Talent and Diversity Programme and Justice & Emergency Services programme to its first panel discussion, looking at delivering diversity and inclusion in policing , with a specific focus for this session on Black, Asian and Minority Ethic (BAME) communities. 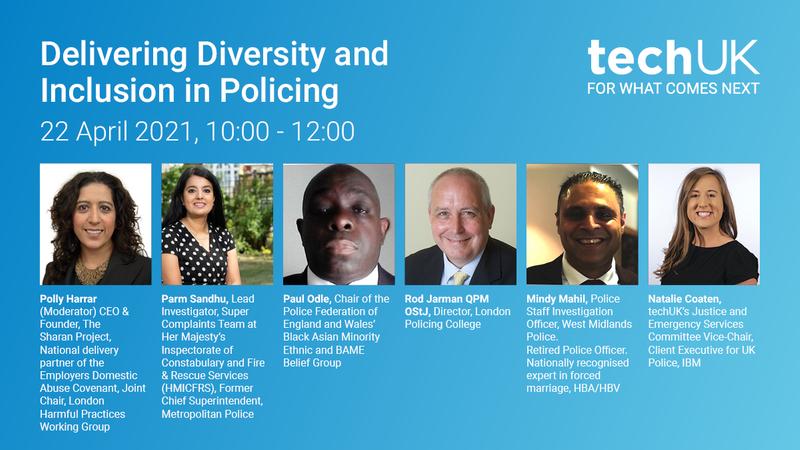 The session was introduced by Polly which included why this is an important area to discuss, with delegates and panellists encouraged to speak openly and freely. Polly also highlighted some interesting and eye-opening statistics -

According to Home Office1 data as 31st March 2020, there were 129,110 full-time equivalent (FTE) officers in post across the 43 territorial police forces in England and Wales of which…

Current campaigns such as Black Lives Matter and calls for Gender Equality and the role of technology, the topic of diversity in policing is all the more relevant today.

The discussion kicked off looking more broadly at the challenges around diversity and policing. On the value of diversity in policing, Mindy noted the change in West Midlands Police since he first joined the force as the only Asian officer in his borough in 1989. Since the Macpherson Report and the Stephen Lawrence case, the impact of diversity has been ramped up, with more officer training and more diverse recruitment including officers not just from Black and Asian backgrounds but other underrepresented communities.

Rod touched on the 20,000 uplift in police officers being underpinned by a drive to move to a more professional approach to police education, moving from recruit training to degree apprenticeships and other routes into policing. Home Office has been clear about the desire to use these things to make change, and already the average age of recruits has dropped.

To continue improving BAME representation across all levels and forces, Paul said that “internal attitudes and ‘traditions’ need to change to build better trust in communities”. There is a need to look at attrition rates and barriers to retention and promotion in addition to eliminating bias in recruitment. Paul emphasised that police forces need to improve when officers leave the profession, collating reasons for leaving to learn and reflect on why BAME colleagues are not staying in policing. This point was echoed by Parm who referred to her experience of exit interviews and the lack of action on feedback or comments made in her own interview.

Following this, the discussion took a deep dive into the application and role of technology and the tech sector. In the investigation of complex cases, Mindy raised that the tech side can sometimes fall short. When dealing with cases such as forced marriage or people trapped abroad, many issues surround communicating with the victim and language barriers. There is a dependence then on Language Line or officers who speak other languages. He said that whilst systems have moved on, any practical tech that can be used to facilitate communication would be welcomed.

Natalie outlined key changes in the tech workplace following the events of 2020 and the growth of the Black Lives Matter movement. IBM have emphasised the importance of education, creating training courses, libraries and resources to understand and address bias and race-related issues, as well as demonstrate how to put those ideas into practice. IBM have also created an anonymous ‘Ask Miss Parks’ chatbot to facilitate open and honest questions on race-related topics. On the issue of preventing bias in technology and policing, Natalie touched on the fact that key issues centre on AI and facial recognition technology (FRT), noting the halting of sales of FRT by IBM and others who have called for regulation of the technology. She said the big debate is around bias in algorithms, which can result from biased training data stemming from biased human decisions or historical inequities. The tech industry needs to ensure AI improves human decision making, encouraging progress on research in this space, and be aware of who may be excluded from training or design processes. She emphasised building diverse teams as an important step to ensure a diversity of perspectives working on and deploying this tech.

Following up on the issue of overcoming bias in policing, Rod noted that stop and search is a key tool of officers in communities, but one which can generate negative feeling if the right approach or impact is not perceived. He said that employing technology to reduce the workload on officers could help put more officers back into community roles where they can employ their communication skills and build relationships with people from all backgrounds in their local context.

Considering how best police can use technology and engage with diverse communities on its use, Paul said that technology has never really worked hand in hand with policing in a way that it could. He referred to how police systems will still use categories such as ‘white’ and ‘non-white’, as well as the use of IC codes, and a need to be more intricate in describing people on these technology-based systems. Paul also argued that more work needs to be done on the use and sharing of body-worn camera footage to offer some learnings for policing.

Responding to a question on tech sector initiatives that the public sector might be able to adapt, Natalie highlighted the Shuri Network created in NHS Digital to promote women of colour in digital health. The network gives a platform to spotlight the contributions of women of colour in healthcare and act as role-models to increase diversity in that sector. She said IBM is working with the Shuri Network on reverse mentoring and shadowing, with everyone involved to share experiences.

The panel received some excellent questions directly from delegates. These questions included – what police can do to rebuild relationships with UK minority groups and what role tech can play in supporting this. Whether there is a budget to implement technology solutions in policing, the use of body-worn video and views of the use of facial recognition.

If you would like to hear more about what was discussed at this session, please reach out to either Nimmi or Georgie using the contact details below. You can also reach out to share your thoughts with techUK.

Georgie joined techUK as the Justice and Emergency Services Programme Manager in March 2020.

Georgie is dedicated to representing suppliers by creating a voice for those who are selling into blue lights and the justice system, but also by helping them in navigating this market. Georgie is committed to creating a platform for collaboration, from engaging with industry and stakeholders to understand the latest innovations, to the role tech can play in responding to a range of issues our justice and emergency services are facing

Prior to joining techUK, Georgie managed a Business Crime Reduction Partnership (BCRP) in Westminster. She worked closely with the Metropolitan Police and London borough councils to prevent and reduce the impact of crime on the business community. Her work ranged from the impact of low-level street crime and anti-social behaviour on the borough, to critical incidents and violent crime.

Jake is the Programme Assistant for Policy, assisting techUK's work across its Policy and Public Affairs; Skills, Talent and Diversity; and Data functions.

Report: Review of policing domestic abuse during the pandemic - 2021

Her Majesty’s Inspectorate of Constabulary and Fire and Rescue Services (HMICFRS) has released a report praising police in England and Wales for responding proactively to domestic abuse during the COVID-19 pandemic.

Your monthly update on the healthtech market, powered by Tussell

A summary and the recording of HMRC's briefing on its upcoming procurement for Managed Desktop Services.

Guest blog: AI in healthcare - How economics can help us understand the risks