“It takes a village” to develop the Future of Compute Skills

The HPC field draws upon skills from a vast set of domains. Demand for specialist skills has grown with every new technology and with the acceleration of HPC adoption in the enterprise. So how to we develop HPC skills for the future? Insight by Per Nyberg, Chief Commercial Officer at Orca Computing for techUK's #FutureofCompute Week 2022 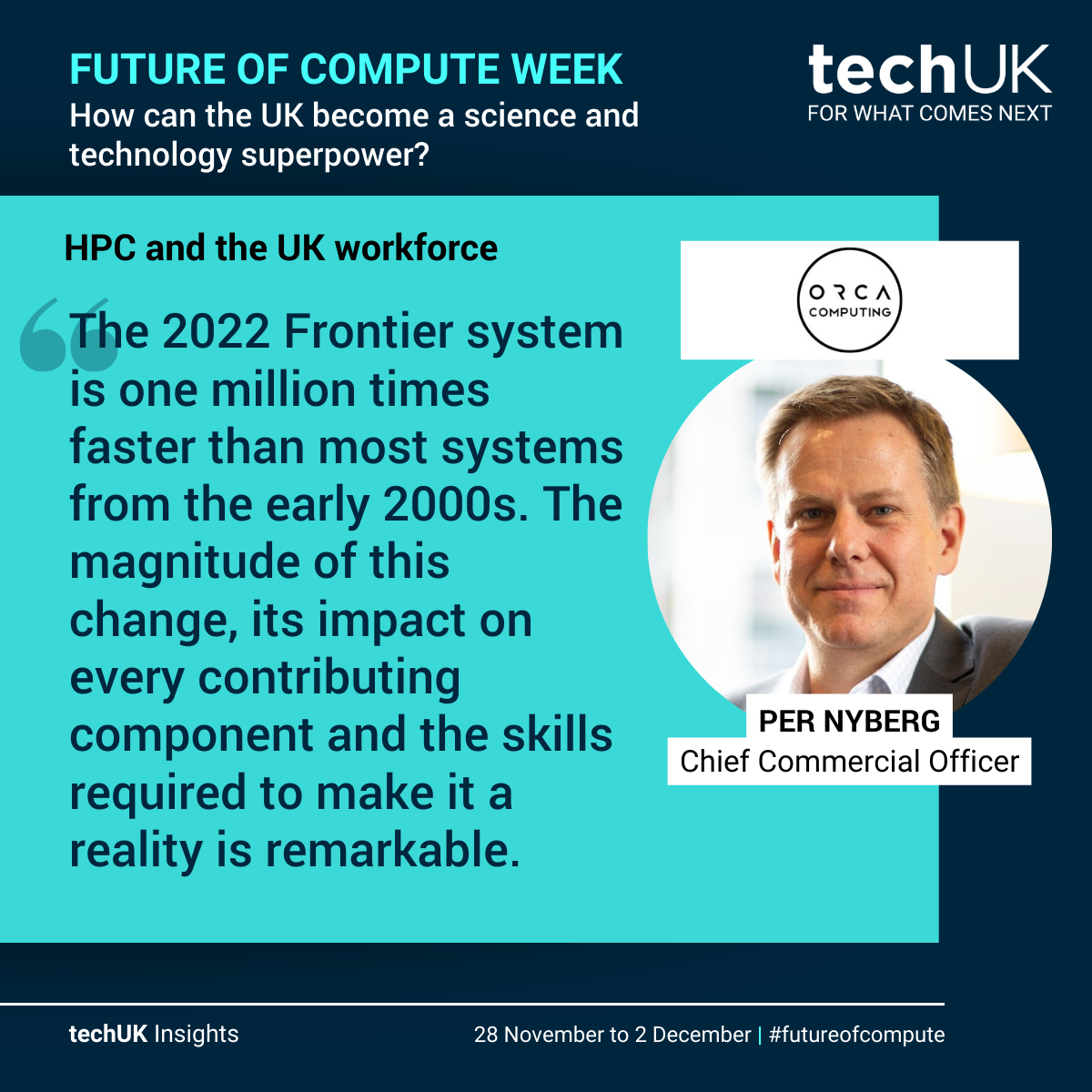 The concept of, “it takes a village” to raise a child has been frequently used over the years by those in the HPC community to illustrate the range of skills required to design, build and operate applications, supercomputers and data centre facilities. There are few technologies which have experienced such explosive growth across so many dimensions.  To illustrate the scale and rate of change, one can look at the performance milestones reached since the mid-2000s. At that time the largest systems were in the Terascale range with computational performance measured in the trillions (10^12) of calculations per second. For example, the Cray built Jaguar system at the U.S. Department of Energy Oak Ridge National Laboratory (ORNL) had a peak performance of 25 trillion calculations per second, or 25 Teraflop/s, when it was introduced in 2005. The next milestone that the HPC community targeted was Petascale, or 1000 trillion, or a quadrillion (10^15) calculations per second.  This was reached in 2008 with an upgraded Jaguar system at ORNL. An application simulating superconductors, or materials that conduct electricity without resistance, measured 1.3 Petaflop/s making it the first scientific application to break the Petaflop barrier. While the performance that was reached was impressive, the necessary advancements in the application programming and underlying technologies to enable such growth in system scale and performance in just three years required the proverbial village.

To round out this illustration, the next milestone in HPC was Exascale, or 1,000,000 trillion, or a quintillion (10^18) calculations per second.  In 2022 the HPE Cray built Frontier system, also located at ORNL, measured 1.1 Exaflop/s on a synthetic benchmark and thus became the first system to break this next barrier. As a rough context, the Frontier system is one million times faster than most systems from the early 2000s.  The magnitude of this change, its impact on every contributing component and the skills required to make it a reality are remarkable.

So, where is this village that makes HPC a reality? As a starting point, it is worth looking at the characteristics of HPC applications and systems. Today’s applications can be composed of several approaches, such as simulation and machine learning, leveraging many different processing, communications, storage, networking and cloud technologies. Examples can be found across any industry, such as whole vehicle simulation in automotive and fraud detection in financial services. With machine learning, the usage of HPC has also expanded into many new application areas and verticals, such as autonomous technologies and retail.

The next major advancement is expected to be with quantum computing. While quantum computing has special functional characteristics unlike any other technology, the effective integration of quantum algorithms alongside simulation and machine learning will be essential.

Ultimately the essential characteristic of HPC applications and systems is tightly orchestrated heterogeneity. Bringing multiple domains to bear on a problem in a coordinated approach to reach maximum performance. Teams of domain-specific experts are required to design, engineer and build one part of the overall solution, such as data architecture design, water-cooling of high-density compute cabinets or a machine learning application for logistics optimisation. Each of those teams then leverages one another to ensure optimal interoperability and overall design. Fortunately, the HPC community at large is built on a culture of cooperation and standards. This was evidenced during the recent SC22 conference in Dallas where nearly 12,000 members of the community from academia, government and industry gathered for the annual supercomputing event.

As such the HPC field draws upon skills from a vast set of domains. Demand for specialist skills has grown with every new technology and with the acceleration of HPC adoption in the enterprise. There has, however, been a skills shortage across most areas of the community and industry for some time. This is also true in emerging areas such as quantum computing where a skills shortage could impede the progress of this essential and transformative technology. Skills gaps are of course not unique to HPC. AI industry reports have consistently cited limited AI expertise or knowledge as primary barriers to adoption for many years. The challenge for HPC is that it is often competing for the same talent. Organisations are needing to develop longer-term skills strategies with talent pipeline development becoming a continuous activity and priority for executive teams and managers. At a national level, assessing and addressing skills preparedness must go hand-in-hand with, and even precede, the funding of strategic priorities. Given the role of HPC to address challenges of socioeconomic importance, it is imperative that the community (or village) remain healthy and vibrant.