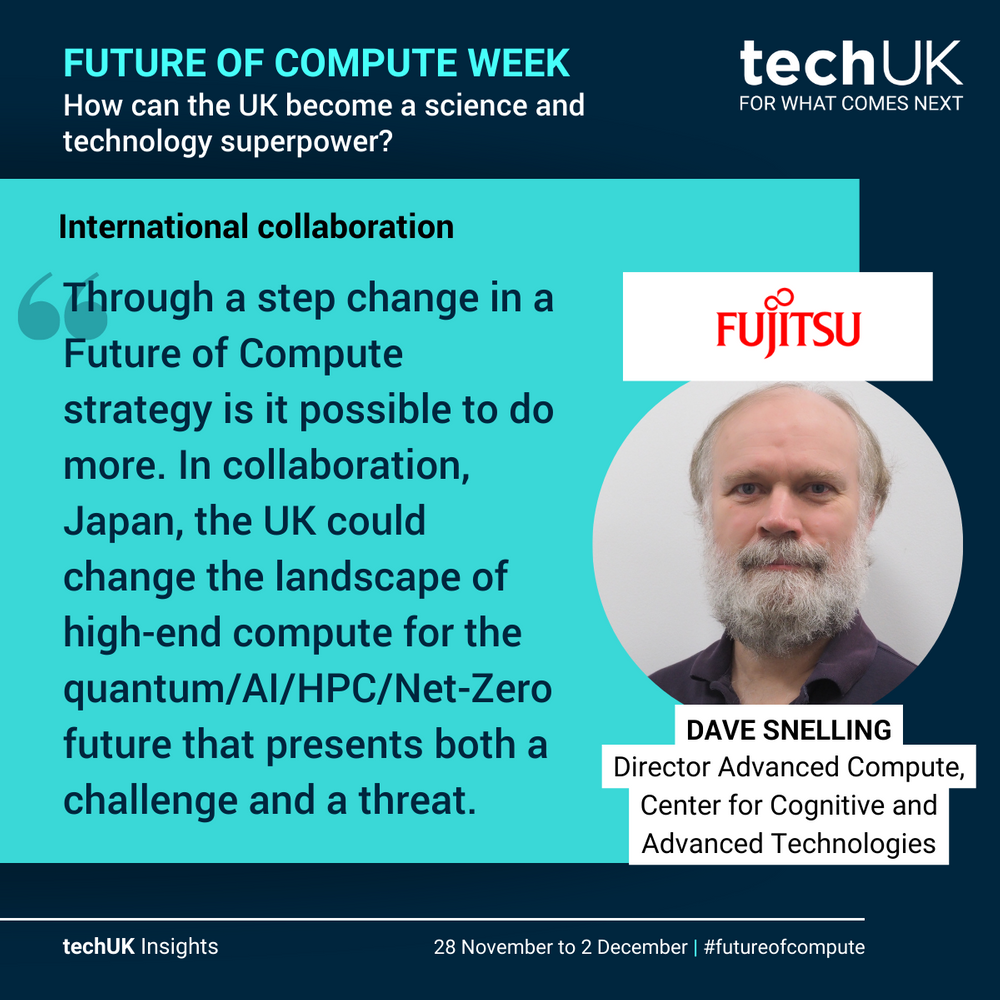 The nation or company that is first to deploy true quantum computing at scale as part of Future Computing strategy threatens runaway progress in science and technology and thereby compounding their economic and strategic advantage. Future challenges will be decided at least in part, by the size and sophistication of nation’s computing resources. Neither the UK, nor Japan, can keep up with other nations alone. Collaboration with strategic allies will be crucial.

There is a strong alignment between Japan and the UK on goals around Net-Zero and scientific advancement for economic and strategic advantage. As G7 island nations, democracies, and nations facing a similar ideological, political, military, and geoeconomic threats, as well as challenges in converting strong research bases in each country into commercialised and operationalised technologies at scale, the two nations have many common interests.

We propose an extension of the UK and Japan’s growing economic and strategic technological collaboration to work together to advance the Future of Compute. Specifically, we propose to bring together HPC (High Performance Computing), quantum, and cognitive computing technologies with the explicit goal of building a supercomputer to top the Green500, a ranking of the Top500 fastest supercomputers by energy efficiency.

The goal is Net-Zero computation, focused on a jointly agreed practical set of applications or problems. The benefits to Japan are access to the UK’s world-leading scientific base, for the UK, access to deep expertise in supercomputing, for both nations, mutually beneficial deepening of strategic ties and strategic and economic advantage through science and technology.

The following Straw Draft provides a starting point for discussions and acts as an indication of the scope of what we seek to work on with Japanese and UK Governments.

Japan’s Fugaku supercomputer, designed and built through a collaboration between Fujitsu and RIKEN, was until recently at the top of both the Top 500 and Top Green 500 supercomputer lists. The system, and its commercial spin-offs are the only supercomputers built around the UK designed ARM low power processor architecture. This success has been the result of a strong focus on efficiency, performance, and flexibility. The underlying ARM approach ensures that low power consumption stays at the forefront of the design approach and with the extended vector capability accounting for the performance and flexibility. A future HPC system designed around this approach would form the core capability of a Net-Zero computing platform.

While such a system, at scale, would address current and approaching needs for compute in the UK and Japan, it would not, as a stand-alone system, address the Future of Compute as we see it. Computing in the future will need to incorporate quantum computational capabilities as well as accelerating capabilities in quantum and large-scale compute enabled artificial intelligence, e.g., foundational models, in current jargon, and to do so in a tightly coupled architecture. Recent discussions at quantum computing roundtables and international conferences have stressed the need for quantum computation to function in concert with classical compute, most particularly AI (Artificial Intelligence) and HPC.

There are existing collaborations between all parties that can be exploited to accelerate both the development and deployment of such hybrid platforms both in the UK and Japan. In addition, this fusion of classical HPC and quantum computing should also be merged with specialist capabilities in artificial intelligence and machine learning

Lastly, many current and future challenges (industrial, societal, and governmental) involve seeking optimal solutions to complex large-scale problems such as balancing thousands of small energy sources, e.g., domestic solar, with classical and novel generation sources and the myriad of energy users. While quantum computing promises much in this direction, current annealing technologies exist that address these problems today, and provide a bridge to future quantum compute.

The UK has long been known as a centre of excellence in software development, particularly in scientific software. Putting this talent to work on these hybrid systems as they emerge, will put the alliance on the leading edge of not just the computing platform of the future, but also its application and optimization. We would expect to a new paradigm emerge where these collective resources combine to solve specific problems not addressable anywhere else in the computing ecosystem – a capability unique to this Anglo-Japanese technical alliance.

The UK will continue for the next few years to build out the high-end compute in line with the needs of academia and business using off the shelf systems from various sources, most likely the US. In this way the UK might keep pace with competitors but remain in the same relative position internationally. Only through a step change in strategy is it possible to do more. In collaboration, Japan and the UK could change the landscape of high-end compute for the quantum/AI/HPC/Net-Zero future that presents both a challenge and a threat.