The UK National Data Strategy: How the UK Government plans to unlock the value of data across the economy

The UK Government has published its policy framework to deliver Mission 1 of the National Data Strategy (NDS): “Unlocking the value of data across the economy”.

Data continues to have an ever-growing impact across society, offering endless unprecedented opportunities to build a connected digital future. From healthcare, to manufacturing to agriculture, almost every industry is set to benefit from greater use of data-driven insights and decision-making.

However, research commissioned by the UK Government shows there are several barriers which stops data from being shared effectively across the economy. This includes, though not limited to, organisations lacking the resources or knowledge to share data, lack of existing incentives to share data and high cost associated with implementing data sharing practices.

Mission 1 of the NDS seeks to tackle these barriers and ensure that the full value of data is realised across the economy and that the correct conditions are put in place to allow organisations to work collaboratively to develop timely access to high-quality and useable data.

The publication builds on research commissioned by the UK Government, “Increasing Access to Data Across the Economy.” This piece of research identified current barriers to data sharing, the potential levers for Government intervention, the cross-sector effectiveness of these levers and associated risks. The findings have guided the development of the UK’s Government’s proposed actions, in line with Mission 1 of the NDS.

Unlocking the value of data across the economy

A greater amount of data sharing by the private and third sector can have a significant impact on the UK’s economy. It can allow organisations the opportunity to improve and develop products and services, broaden the scope of research and academia, and give consumers more power over how their data is being used.

This policy framework is a welcome and valuable start to helping facilitate data sharing and outlines key areas for Government action, as well as a package of interventions and activities to address them. The full document can be found here. 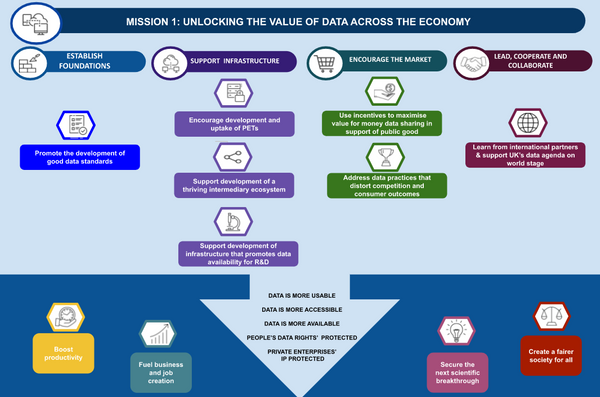 The policy framework sets out four priority areas for action:

You can find a summary of the policy framework below though note that those interested in learning more about what the UK Government has done and plans to do, should read the full document which can be accessed here.

Establish Foundations: This priority area focusses on building a strong foundation to build an accessible, interoperable, and useable data economy which also protects the rights of data subjects. The UK Government believes a common approach to standards can facilitate greater data sharing, interoperability, and innovation.

To promote the use and value of data, the UK Government plans to:

Support Infrastructure: The development of infrastructure is seen by UK Government as a way in which to stimulate innovation and unlock the power of data across the economy.

To help deliver this, the Government aims to facilitate infrastructure development in the following ways:

The UK Government plans to:

Lead, Cooperate and Collaborate: Finally, the UK Government outlines the benefits of engaging internationally to identify learnings, best practice, and opportunities for collaboration beyond our borders.

The UK Government will deliver this by:

techUK recognises the far-reaching benefits data sharing will have on UK-based organisations and the economy and welcomes this policy framework which we believe will set the UK on a good course for success. We look forward to learning more detailed plans on the delivery of this initiative, and to engage with the UK Government on the more technical considerations of the framework.

Dani joined techUK in October 2021, where she is now Policy Manager for Data.

The final Online Safety Bill – what is in it and what does it mean for techUK members?

The Government has published the final Online Safety Bill following years of consultation and a detailed pre-legislative scrutiny process that resulted in a long list of recommendations from parliamentarians to improve the draft Bill.