How vehicular communications will revolutionise mobility

Imagine a beautiful world where the car stopping at a red light in front of you immediately starts moving when the light turns green, without any noticeable delay. A world where drivers never forget to signal a turn and only use the horn when strictly necessary. Even better, imagine if horns were often wireless signals inaudible to the human ear. Vehicular communications help create that world and paired with autonomous vehicles, revolutionise the transportation and mobility industries. This task does not come without its challenges, but wireless communication technologies for vehicular applications already exist and are already being installed in cars.

Drivers already communicate with each other in traffic, even though sometimes not in the politest ways. Still, cars come equipped with indicators that allow drivers to communicate the intention to turn and a well-timed honk can prevent an accident. Vehicle-to-vehicle (V2V) communications have the potential to enhance, and later replace, traditional forms of information exchange in traffic with wireless communications. Initially, this can allow drivers to know what vehicles outside their field of view are doing and indicate whether it is safe or not to proceed at an intersection. Vehicular communications are not, however, limited to the exchange of information between vehicles. Road infrastructure such as traffic lights and signs can also be equipped with wireless communication modules. Infrastructure can inform vehicles of a pedestrian crossing area, a change in speed limit or even an accident miles away from where the vehicle actually is. To that extent, any wireless communication device could provide and receive useful data from vehicles in what is known as vehicle-to-everything communications (V2X). 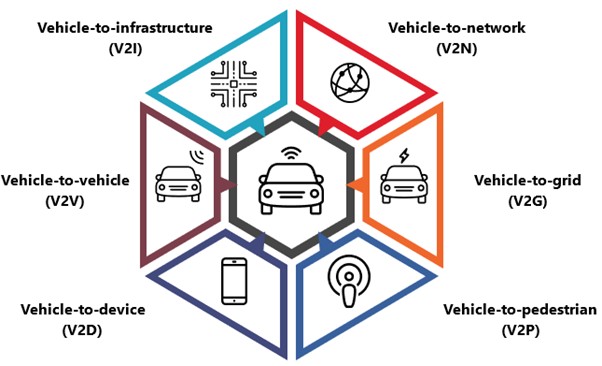 Amongst the benefits of connecting vehicles, there is an increase in road safety. The US National Highway Traffic Safety Administration estimated that full V2V adoption could prevent between 13 to 18 percent of light-vehicle crashes in the US, which could save hundreds of lives every year. Traffic efficiency is also increased, as connected vehicles can coordinate to maximise overall mobility. Platooning, for example, can be used to increase the capacity of roads by safely reducing the distance between vehicles in the same lane. Connected and autonomous vehicles can coordinate the movement of an entire row of vehicles, known as a plateau, and move as one through traffic. Platooning also reduces air resistance experienced by vehicles, much like flying in formation reduces the resistance felt by a flock of ducks. That means that coordination and communication amongst vehicles can reduce energy consumption and CO2 emissions.

As a critical application, however, vehicular communications require high levels of reliability. An error in the communication link could cause a fatal accident, which is why some V2X technologies are designed to provide a stability of 99.999%. Latency is also a concern since a delay of a few milliseconds becomes relevant when the communicating stations are vehicles at high speeds. However, no other challenge of the connected vehicle industry receives more press than cybersecurity. Vehicular communication standards need to be robust against denial of service, electromagnetic jamming, and other types of cyber-attacks as well as handle message authentication and misbehaviour detection to prevent malicious agents from exploring the communications network to cause accidents or gain advantages in traffic.

Another unique requirement of vehicular communications is the necessity to maintain communication links without any additional infrastructure. Communications in remote or under-developed areas are paramount and, because of that, Wireless Local Area Networks (WLAN) technologies were chosen for some V2X applications. In 2010, the Institute of Electrical and Electronics Engineers published the WLAN standard IEEE 802.11p building up on the success of the 802.11 standards. 802.11p was used as a basis for Dedicated Short Range Communications (DSRC) and, in 1999, the US Federal Communications Commission (FCC) allocated 75 MHz of spectrum in the 5.9 GHz band for this type of technology.

It did not take long until other standards, based on cellular communications such as 4G’s LTE and 5G’s NR, started to be developed. Known as cellular V2X (C-V2X), these technologies are standardized by 3GPP and are promoted by organizations such as the 5G Automotive Association. C-V2X technologies introduce another level of vehicular communication, known as V2N or vehicle-to-network. Allowing vehicles to communicate with a cellular network can make traffic coordination more robust but raise concerns about client charging and cross border operability. It is still unknown if C-V2X will prevail over DSRC, since the technologies are incompatible with each other. While companies such as Ford have opted for C-V2X, Volkswagen and others have opted for DSRC.

Regardless of the technology, vehicular communications will soon become an integral part of traffic and mobility. Innovative technologies are being developed to make sure that vehicles can safely and reliably communicate between themselves and with other entities. Much like anti-lock braking systems, vehicular communications may become a mandatory feature in all sold vehicles in the near future and, together with autonomous vehicles, completely revolutionise the mobility and transport industries. When that happens, communication between (electronic) drivers will certainly become much more efficient and amicable than what we have today.