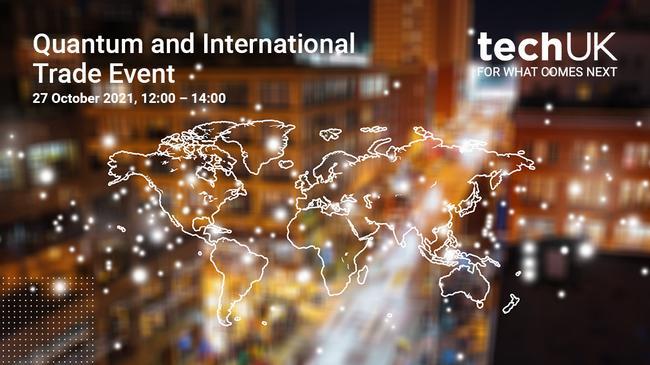 You can watch the event below, which is followed by techUK’s round-up of the event.

The panel on international collaboration on quantum technologies brought together quantum experts from the countries breaking ground in quantum to explore where international corporation is moving and how we can work towards adaptive regulatory strategies and industry standardization to strengthen global partnerships.

Moderated by Sabina Ciofu, Head of EU and Trade at techUK, the first panel kicked off by a brief overview of national quantum initiatives from the participating countries.

Celia Merzbacher, Executive Director of Quantum Economic Development Consortium (QECD), pointed out that one of the key enablers of the US quantum industry is significant historic investment by the US government, which supported a robust base of fundamental research, and this has led to several transformational breakthroughs in the field.

The US National Quantum Initiative has been running since 2018 when there was the legislation passed to create a multi-agency coordinated program across several US agencies that invest in science funding. The US government acknowledged how important it is to coordinate government funding with the private sector investment. She went on to highlight that there is a lot of big bets being made by the private sector at the same time that the government is making significant investments in the basic scientific research. The QECD was created to bridge that gap and bring together the whole ecosystem.

Singapore is one of the frontrunners in the quantum technology development. The Singaporean government was among the first ones to make a significant investment in the country’s quantum engineering capabilities. Prof Alexander Ling, Director of Quantum Engineering Programme and Associate Professor from National University of Singapore, mentioned that the key ingredients for success lie in the continued government funding into quantum research. The Singaporean government started to put sustained funding into basic research in quantum back in 2007, when the Centre for Quantum Technologies was established. Alexander also highlighted how important it is to support spin offs set up by entrepreneurs and academics at universities as these create valuable links between research and industry.

Dr Keith Dear, Director of Artificial Intelligence Innovation at Fujitsu explained in more detail the Q- Star Alliance model introduced in Japan this year. The Alliance brings together 25 Japanese companies to create a new strategic programme to collectively progress work in the field of quantum computing. Q-STAR invites the participation of diverse industries that support its objectives and initiatives, and collaborates with industry, academia, and government in promoting initiatives that apply new technologies, and establishing related technology platforms. It also aims to establish a globally-recognized platform that will promote collaboration with other organizations around the world working in quantum technology.

All panellists highlighted the need to coordinate government funding into quantum technologies with private investment to maximize opportunities for the advancement of the field. International collaboration is of vital importance if we are to succeed and progress at pace. Knowledge sharing, research partnerships and international regulatory cooperation will be crucial to drive innovation and bring the benefits of the quantum commercialization to all.

The panel were clear that international community needs to participate in the development of standards to ensure the best possible outcome and take advantage of common approaches.  Governments, regulators and businesses need to work together to set standards that work for the industry and do not stifle its growth. New standards groups within classic computing may need to come together for standards specific to Quantum computing including the development of software tools for running software on QC hardware. The idea of regulatory/technology diplomacy – like minded nations to come together to outline the key positions in international regulation- emerged.

The panel were also clear that quantum technologies belong to an ecosystem that goes beyond computing. It can also include technologies such as QKD or quantum simulation. Each of these technologies are at different levels of maturity and therefore different stages of commercialisation. This is important to recognise when we look at the first use cases that will enter the market in the coming years.

Fundamental to commercialisation is developing access, which relies on tackling a number of interconnecting aspects such as training and education, building supply chains, and developing complementary software application suites that will unlock value of quantum computers.

Focusing on access to quantum, Stuart Woods, Oxford Instruments introduced the concept of commercialisation through cloud computing. He stated that “cloud for the people” allows for democratisation and acceleration of quantum technologies. Bringing quantum to the people by the cloud in turn will encourage use this technology and become inspired by new and innovative use cases.

The conversation turned to developing roadmaps, and each speaker showcase what is happening in their region. Vikram Sharma discussed the National Science Organisation Australia (CSRIO), who recently released a quantum roadmap which showcased some of the opportunities and barriers of quantum in Australia. Of particular importance, this roadmap estimated that by 2040 Quantum tech would generate 4 Billion and create 16,000 jobs in the Nation. Figures like this showcase the value of quantum and help motivate industry to get involved in the quantum ecosystem.

Equally, roadmaps are crucial for policymakers as it shows what they need to promote to achieve these goals, whether that is domestic such as skills, or international such as trade agreements to open up international collaboration.

Throughout the conversation, the development of skills was a frequent topic of discussion. Education needs to be a constant dialogue between universities, quantum companies and industry. Whilst Universities are crucial, and PhD’s in quantum are fuelling quantum research, there is such a demand for quantum skills it needs to include those already in the workforce, apprentices, and those who have never been to university in the first place. In other words, a PhD in quantum is not always necessary to work in quantum.

Based in Brussels, she leads our EU policy and engagement. She is also our lead on international trade policy, with a focus on digital trade chapter in FTAs, as well as broader engagement with the G7, G20, WTO and OECD.

As a transatlanticist at heart, Sabina is a GMF Marshall Memorial fellow and issue-lead on the EU-US Trade and Technology Council, within DigitalEurope.

Previously, she worked as Policy Advisor to a Member of the European Parliament for almost a decade, where she specialised in tech regulation, international trade and EU-US relations.

Sabina loves building communities and bringing people together. She is the founder of the Gentlewomen’s Club and co-organiser of the Young Professionals in Digital Policy. Previously, as a member of the World Economic Forum’s Global Shapers Community, she led several youth civic engagement and gender equality projects.

She sits on the Advisory Board of the University College London European Institute and The Nine, Brussels’ first members-only club designed for women.

Sabina holds an MA in War Studies from King’s College London and a BA in Classics from the University of Cambridge.

The final Online Safety Bill – what is in it and what does it mean for techUK members?

The Government has published the final Online Safety Bill following years of consultation and a detailed pre-legislative scrutiny process that resulted in a long list of recommendations from parliamentarians to improve the draft Bill.