Science, technology, engineering: three things that underpin our everyday lives. And maths – the discipline that underlies them all and that completes the acronym of ‘STEM’.

In the UK in 2020, women made up only 24% of the STEM workforce. This may be a momentous improvement from the 14% female STEM workforce in 2015, but it is a long way off from representing the actual population; there remains a stark disparity in the number of women who pursue STEM careers compared to men and given the gendered nature of STEM A-Level choices in the UK, it would seem that the bias is present at school.

From birth, we know that children are exposed to a broad range of overt and indirect gender socialising. This gendered messaging can inadvertently affect children’s educational choices and attainment, which is not separate to their occupational trajectories later in life.

There are many factors which contribute to the lower levels of female STEM engagement from the absence of other women to gender disparities in the classroom. Whatever the reasons behind the gender inequality in STEM, it cannot be denied that it is present: STEM educational and skills attainment for women in the UK is less than half the rate of men.

Not Just a Numbers Game

It’s not just a numbers game. We don’t need more women in STEM to achieve a perfect ratio. Rather, women’s experiences and ideas are valuable to research and innovation, to design and engineering, to public policy and the economy. Women are consistently overlooked and under-represented which results in non-male issues often being neglected or not even realised.

Take the seat belt example: seat belts (and cars more generally) are designed based on the male anatomy so, in the event of a car crash, women are significantly more likely to be injured and die than men. And this doesn’t even touch on the poor design of seat belts and the consequences for pregnant women. With technology and information quickly becoming the foundation of modern society, excluding women and girls from STEM essentially excludes them from society.

But how can we begin to address the issue and break the bias? First things first, we need the data. As well as being gender disaggregated, the data also needs to be spatial. National data surrounding STEM in education and the workforce exists, but it is very difficult to find localised open data and, since everything has a geography, investigating the spatial patterns and relationships of the gender imbalance of STEM is imperative to finding solutions.

Where are girls less likely to pick STEM A-Levels? Is there a region which has greater female STEM enrolment in higher education institutes? Which local authorities have the lowest rates of women in their STEM workforce?

It is rare that a one-size-fits-all approach works, therefore identifying the particular trends and issues on a local scale will help to understand what can be done to challenge the inequalities.

Accessibility and transparency are key - obtaining data surrounding the geographical scale and spread of STEM (dis-)engagement will allow us to tackle the root causes and #BreaktheBias for Girls and Women in STEM. But before we can begin to break the bias surrounding gendered STEM engagement in education and the workforce, we need the data to be shared and made more readily available.

In this episode we explore the concept of ‘place’ in care, the principles behind it, the impact of Covid-19 on care delivery, prospects for innovation following the introduction of Integrated Care Systems, examples of industry best practice, and where listeners can go to learn more about ‘place’ and innovation in care. 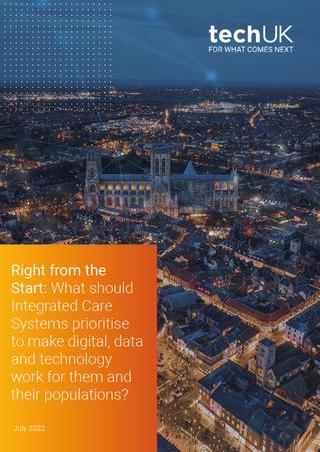 Right from the start: What should Integrated Care Systems prioritise to make digital, data and technology work for them and their populations?

Raheema is entering her final year at the University of Coventry following a 12-month placement with Atkins Geospatial Team in Birmingham.