From April 2018, all companies in the UK with 250 or more employees had to report their gender pay gap. The next set of reporting is just six months away and techUK is launching its guide to writing a good Gender Pay report. 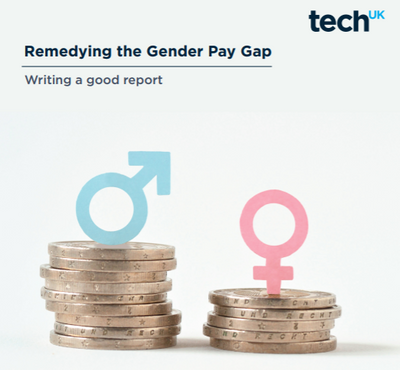 We are now just shy of six months away from the next set of reporting and techUK is launching its guide to writing a good Gender Pay report, ‘Remedying the Gender Pay Gap: How to write a good report’.

It is important to note that the guide is not a silver bullet for any company to dramatically improve their gender pay gap ahead of next year’s result. Instead the report should be read as a plan to writing a good report and a series of steps a tech company should consider to embed meaningful gender diversity into their company culture, for example by becoming a signatory of the Tech Talent Charter or establishing a Returners Programme or Returnship. For techUK large member companies, this means that actions taken here will improve your diversity outcomes in the medium to long term meaning in your 2019 report you can flag your commitments and changes in the pipeline. For techUK SME members, taking these steps now will help a company improve its culture and in turn, ensure a company is on the best possible footing ahead of mandatory reporting as the company expands.

The report was launched at a breakfast event hosted by the techUK Skills and Diversity Council, the event included a summary of the report’s main recommendations by Sarah Atkinson, Vice-Chair of the Council and Vice President of Communications at CA Technologies, followed by a panel discussion on gender pay with leading industry and non-profit experts including: Helen Wollaston, Chief Executive of WISE Campaign; Karina Govindji, Group Head of Diversity and Inclusion at Vodafone; Inge Woudstra, Director of W2O Consulting; and Michael O’Sullivan, Senior Business Development Manager at Dentons.