Tim Olsen, Intelligent Automation Director at Hays Technology, writes about how we can remain mindful of automation's impacts.

In 1779, Ned Ludd, a weaver from Anstey, near Leicester, England, broke two stocking frames in a fit of rage. Ned’s actions created quite a stir and English textile workers, protesting against manufacturers who used machines in what they called "a fraudulent and deceitful manner" as they feared that the time spent learning the skills of their craft would go to waste, as machines replaced their role in the industry became known as ‘Luddites’. Sources disagree as to whether Ned was an actual person but the term Luddite” is now widely used to describe people who dislike new technology.

Ned and his fellow protesters might not have realised it, but they were witnessing the first industrial revolution, that of mechanisation, steam power, and weaving looms. This was followed by the second industrial revolution; mass production, electricity and assembly lines, the third; of computers, electronics, and physical robots, and now, we are on the cusp of the fourth industrial revolution; intelligent automation, AI, the Internet of Things.

Automation is key to future productivity. Ned might have lost his job as a weaver, but had the Northern Mills not adopted the weaving looms the reality is that many more would have eventually lost their jobs as the industry became uncompetitive. Many believe that automation is a necessity if we are to be competitive and grow our economy, but can we replace workers with software and retain a clear conscience?

Indeed, history is repeating itself as we find ourselves in the Fourth Industrial Revolution, and again the notion of job losses as a consequence of automation comes under scrutiny. The World Economic Forum has already predicted that the number of jobs provided through increased automation by the end of 2023 will outweigh those made obsolete.

The British government recognises that work will be created as well as reduced: “The risk we face is not a robot takeover of our workplaces, but that our lack of adoption and the reluctance of businesses and the Government to lead the way in the Fourth Industrial Revolution will mean other countries will seize the initiative and take the advantage of new technologies, not least the growth and jobs they bring, while we are left behind.” (Source: Automation and The Future of Work, Aaron Benanav). Likewise, France’s dedication to staying competitive in the industrial sector has led to significant investment in people as well as technology.

Countries committing to technology can also unlock other benefits for its people. In Thailand, for example, the government plans to use tech-driven solutions to enable citizens in remote parts of the country to access public services, thereby reducing inequality. Meanwhile, Germany’s Minister for Economic Affairs & Energy, Peter Altmaier, is leading a project that will involve the public in technological innovation to remove scepticism and ensure transparency in all aspects of development.

One of the socio-economic challenges arising from automation is that the sectors of society are not impacted equally. It is the lower-skilled, more disenfranchised sectors that tend to be more easily automated as a result of the repetitive nature of the work. It falls on all of us implementing automation to take ownership and mitigate the negative economic impacts of our programmes.

In the paper they claim that automation absolutely can provide a positive impact for humanity, but to achieve this, organisations need to progress through a variety of ‘levels’ whereby socio-economic impacts are mitigated:

Level 0: Cost-focused automation. At the lowest level of the pyramid, the key objective is to attain financial benefit. Whilst the socio-economic costs are high, these programmes inevitably fail to gain the support of the workforce and meet resistance throughout their lifecycle.

Level 1: Performance-driven automation. This takes account of human interaction with the automation, humans are used within the process to make experience-based decisions or interact where the process falls beyond the capability of the robot. Whilst the primary objective now focuses on overall performance rather than cost, there is still no real value associated with employee wellbeing or social benefit. Profit remains the key driver.

Level 2: Worker-centred automation. At this level, the organisation becomes conscious of the impact of automation and acts primarily to improve the overall welfare of the employee rather than solely organisational profit. The objective shifts to encourage new forms of human augmentation. While this now results in an employee-led approach, the wider economic and social impacts are not at the forefront of the organisational strategy.

Level 3: Socially responsible automation. At the top of the pyramid, societal wellbeing is key. Automation produces more net roles for humans through growth and productivity, and robots are designed to assist humans in their roles. Business leaders commit to build new revenue streams and developing growth.

As I sit at my keyboard and ponder over this conundrum, my lawn is being diligently and quietly cut by a robot mower. Not having to mow my lawn myself gives me greater flexibility and convenience. I have the time to focus on my work and develop myself personally, and perhaps even contribute to the knowledge of others. No one is worse off as a result; indeed, the manufacturer has grown their workforce and profits as a result of my purchase.

We should not fear automation itself, however, we should remain mindful of its impacts and act with conviction and deliberation to ensure it has positive impacts across all of society, not just the fortunate few. 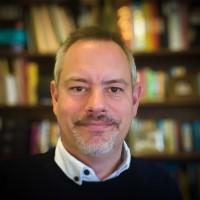 Tim has worked in digital transformation for 20 years developing solutions to improve user journeys and experience for blue chip clients. More recently, he grew the UK’s largest RPA CoE and went on to specialise in helping organisations overcome their barriers to scaling automation. He is a thought leader and evangelist for Intelligent Automation, and leads the IA Consulting specialism for Hays.