How do your equality, diversity and inclusion (EDI) practices stack up?

WithYouWithMe has partnered with YouGov to undertake research into the ED&I practices of UK organisations - and uncovered some surprising results. 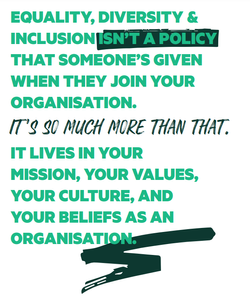 In 2022, businesses and government agencies understand that equality, diversity and inclusion are more than just human resources buzzwords. They are critical in building an engaged workplace that’s more productive and innovative, and less likely to leave, than their homogenous counterparts. As a result, organisations are making efforts to increase equality, diversity and inclusion in the workplace. While much headway has been made, there’s still significant room for improvement in hiring practices and opportunities for workplaces to scratch below the surface and institute modest changes that could have a significant impact on making their workplaces welcoming for more people.

The study, carried out by YouGov on behalf of WithYouWithMe. More than 500 British managers contributed to this report, which includes key benchmarks and recommendations for best-practice approaches workplaces can put into action today.

WithYouWithMe is a social impact company that helps organisations solve their digital skills shortages by identifying new tech talent in places others don’t look – whether it’s underrepresented groups in society or within their existing workforce. WYWM launched in 2015 to solve the problem of veteran underemployment – but they soon discovered that CV's were a significant barrier to employment for numerous groups in society.

At the same time, organisations around the world are being significantly challenged by the digital skills crisis – and unable to find the people they need to fill their high-demand tech roles.

To solve both problems, WYWM helps individuals identify their strengths and upskill for new digital careers without needing a university degree or prior job experience.  They then place these individuals into meaningful careers at some of the world’s leading employers. To date, the approach has helped more than 40,000 veterans, military families, neurodivergent people, women in tech, youth, Indigenous communities and refugees to find their true potential.