Guest blog: How to navigate your FinTech (ad)venture in China

China has been a hot place for FinTech for some time now. The Financial Times reported in 2016 that the Chinese tech centres of Shenzhen and Hangzhou have given Silicon Valley a run for its money for the first time. 90 per cent of Fintech investment in Asia was made by Chinese companies. In 2020, Ant Group, the fintech arm of Chinese e-commerce giant Alibaba, is planning a Hong Kong float as soon as this year and targets a valuation of more than $200 billion. This IPO will also highlight the opportunities for Chinese cities to develop into global fintech centres in the next few years.

The UK and China have been working closely in the Fintech sector. The UK-China FinTech Bridge was launched in November 2016 in London during the eighth UK-China Economic and Financial Dialogue by the Chancellor of the Exchequer, Philip Hammond and Chinese Vice Premier, Ma Kai.  The Bridge is underpinned by a regulatory co-operation agreement signed between the Financial Conduct Authority (FCA) and the People’s Bank of China (PBOC) that enables regulators to share information about financial services innovations in the respective markets, including emerging trends and regulatory issues. This strategy was re-emphasised earlier this year by an HM Government-commissioned report stating the roadmaps and timeline of collaboration between UK fintech firms and Chinese stakeholders.

This report has also captured the regional FinTech hubs in China and in the UK. In China, apart from Hangzhou where Alibaba is based, cities like Shenzhen, Beijing and Shanghai are also known as the top tier cities for FinTech in China. Each city has a unique ecosystem and ample resources to support the global ambition of fintech start-ups from around the globe. Such resources include talent, funding, incubators, accelerators, associations, start-ups and regional regulators.

To further illustrate these opportunities and the current status of the Chinese cities, a chart below has been made to identify and clarify the leading cities’ policies. 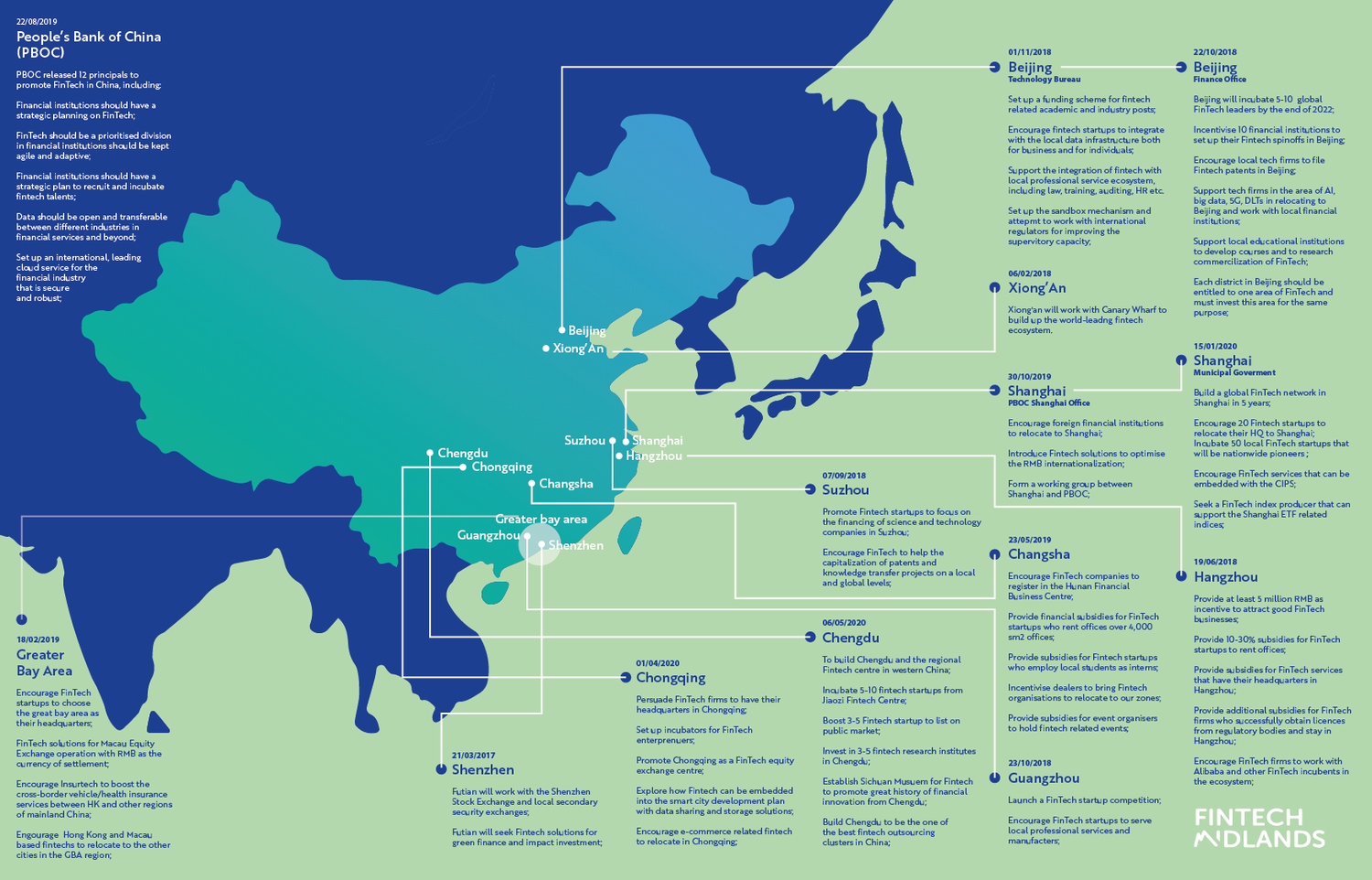 Obviously, cities in China are competing with each other to become regional or national fintech centres by offering different incentive packages to fintech firms and financial institutions. This trend correlates to competition in other industries and indicates the driving force of how different cities have expanded over the past few decades. In the Fintech sector, however, the regional demand is slightly different, owing to their own competitiveness and characteristics of traditional industries. For example, the Greater Bay Area includes Guangzhou, Shenzhen, Hong Kong and Macau and is a project which focuses on the integration of services between Hong Kong and Mainland China. Shanghai, Hangzhou and Suzhou are located in the East of China. These cities are focusing on the future of RMB internationalisation and how Fintech can add value to that process. Xiong’an and Beijing are near the political power centre of China which designs the global fintech centres with collaboration with Canary Wharf. Inner cities like Chengdu, Chongqing and Hunan Province are also very ambitious but position themselves as a regional Fintech hub instead of competing with the other regions.

There are many policies in regional parts of China that UK based fintech organisations can observe. When UK Fintech companies design their international strategy in China, they should look at China as a single market but with distinctions between different regions. If an InsurTech company would like to expand their vehicle insurance to China, for instance, the Greater Bay Area seems to be a great option when looking at regional policy guidelines.

Although the Midlands region of the UK was not highlighted in this report as a UK FinTech hub, the organisation Fintech Midlands will keep local fintech businesses promoted in China and with the latest development of Chinese fintech policies. Local fintech start-ups and businesses should also be aware of these opportunities and challenges in China. In particular, Wangdaizhijia, the leading FinTech advisory business based in Shanghai and mentioned in the EY report (P.19), visited Birmingham on the invitation of Dr Wei Wu in 2016. Eight local businesses presented their entrepreneurial ideas to Wangdaizhijia and had impressed them very much. United, the Midlands will revive as a fintech hub not only in the UK but also around the globe.

Original article can be found here.