techUK’s Public Services Board (PSB), in partnership with Dods Research, is delighted to publish this report evidencing individual supplier experiences and perspectives of collaborating with public authorities delivering digital public services. It seeks to demonstrate suppliers’ support for the very challenging issues government faces as well as its willingness to share knowledge and expertise as appropriate. 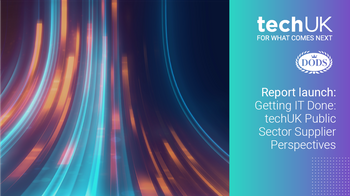 This report was commissioned by the PSB to collect the observations and thoughts from its members along with other key members of its central government programme. The Dods team conducted in-depth interviews with ten members of the techUK Public Sector Board and seven of the remaining members completed an online survey covering the same questions. Interviews and surveys were carried out, during March and April 2022, semi-anonymously to allow frank and constructive responses.

The report identified a number of key achievements and challenges:

The suppliers recognised the significant progress made in the last ten years. Eight in ten (80%) representatives from companies interviewed thought that the public sector’s commercial knowledge and understanding of data and tech had improved. Achievements like the implementation of the G-Cloud and Digital Outcomes and Specialists frameworks; and the establishment of the Digital Marketplace buying platform have significantly opened up opportunities for more tech product and service providers – including innovative SMEs. The DDaT Sourcing Playbook launched in April 2022 is an excellent example of effective collaboration between government and suppliers to improve the procurement process and deliver more effective and efficient outcomes for the public and taxpayers alike through innovative use of technology.

The report notes that government still faces obstacles to delivering ongoing digital transformation. Technology suppliers highlighted the challenges of ensuring sufficient access to skills, updating legacy tech and systems, the growth of overlapping frameworks, and the existence of some operational silos.

Although the majority of suppliers (91%) reported having good or excellent understanding of government tendering processes and selection criteria, the report notes that this high level of understanding does not reflect a simple and easy-to understand process, but rather is the result of a concerted – and business-critical – effort from suppliers.  Suppliers firmly support the principles behind social value in procurement, however, its implementation has proven challenging. As tightly competed contracts for tech goods or services are normally won or lost by narrow margins, establishing clarity and confidence on how social value is evaluated and monitored is critically important.

The potential of the changes heralded by the DDaT Sourcing Playbook and the Procurement Bill are promising. While 40% of suppliers responded that frameworks and playbooks are widely followed across government, there is interest in seeing procurement reforms successfully implemented and even more broadly adopted.

“Advances in digital public service provision have been made possible by the extraordinary innovations that the UK and wider global tech industry have brought to market.  By recognising this success and making recommendations for continued improvement, this report hopes to foster the continuation of meaningful dialogue between public sector buyers and tech suppliers.”

“Government has been responsive in introducing more agility and standardisation in both its procurement, and digital service design and implementation processes. This report acknowledges these achievements and is open about areas where opportunities exist that can further improve collaboration between government and its expanded tech supply base. In turn, this kind of engagement can help improve digital service provision at local and national levels for the benefit of users and tax payers.”

BT Government Director and Chair of techUK Public Services Board

Getting IT Done - a techUK & Dods Research Report.pdf
Return to listing