techUK has released the results of a new wave of our Digital Economy Monitor survey. Data for this poll was collected during the third quarter of 2022, seeking to measure and track operational changes, business performance and how techUK members view UK’s economic outlook over the next 12 months.

Our results show that tough economic headwinds in 2022/23 have had a noticeable impact on the UK tech sector. Business confidence has fallen in comparison to prior waves of the survey with companies reporting that staff and energy costs are having a significant impact on their operations. As they look to ahead to the next 12 months techUK members, are concerned about accessing talent and skilled workers as well as maintaining their investment and growth plans.

techUK members believe the Government can play an important role in assisting the sector to overcome the economic turbulence. According to these results, the right balance will be a combination of short-term measures to support businesses cope with rising costs as well as medium to long term support to boost R&D, digital skills training, and access to overseas talent.

Commenting on the results Neil Ross, Associate Director of Policy at techUK said:

“The technology sector is resilient and has overcome major challenges such as Brexit and COVID-19, however, recent economic headwinds, rising energy and staff costs as well as longer-term concerns over access to talent are starting to bite.

“If supported, the technology sector has a crucial part to play in helping turn around the UK’s economic slowdown and is projected to add £41.5 billion to the UK economy by 2025.

To enable this, the Chancellor must set out a long-term plan on 31 October that gives tech businesses access to the talent they need as well as the confidence and support to invest in R&D, productivity-boosting technologies and skills.”

There were four key themes shown across the survey results: 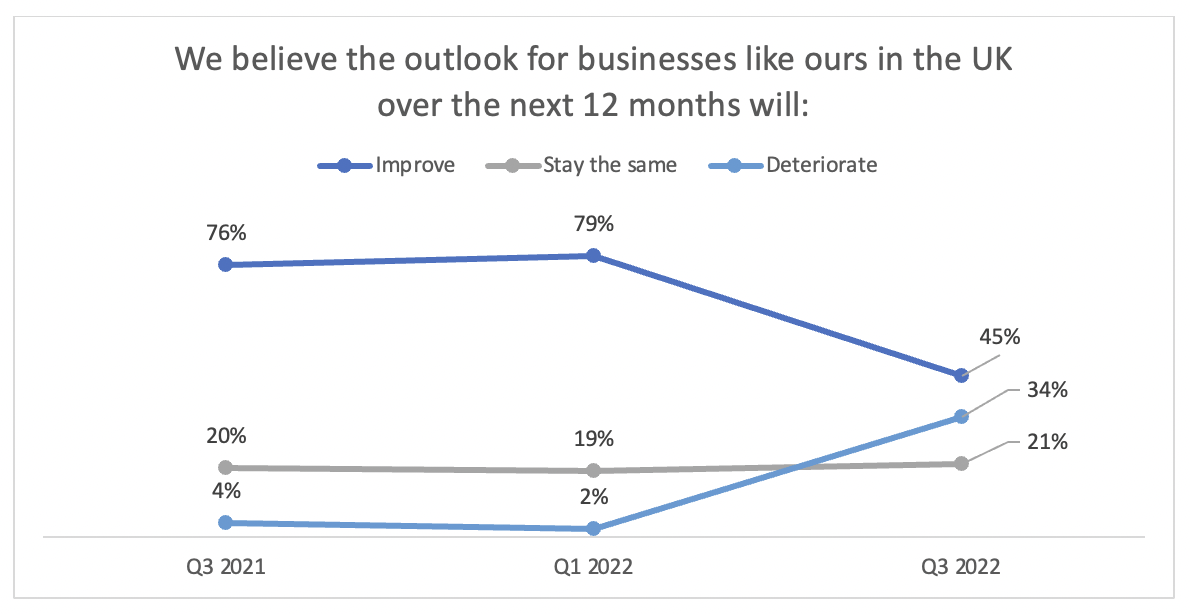 When asked what cost increases techUK members expect will have the biggest impact on their business over the next 6 to 12 months, most said that their largest cost increases will come from staff costs (65%) and energy costs (47%). These findings indicate a very tight UK labour market and a strong demand for workers with digital skills, both of which are having a higher impact than rising energy costs, according to our results. 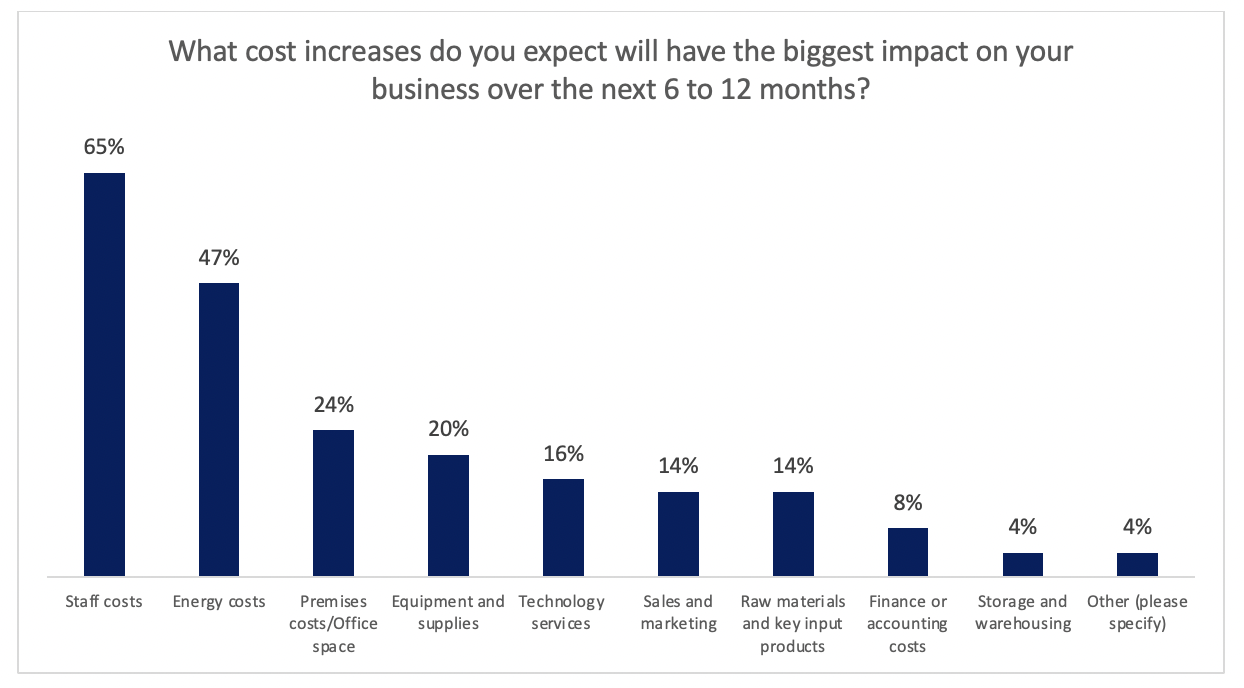 When asked to identify the biggest challenges their businesses would face over the next 12 months, techUK members largely identified accessing talent and skilled workers (57%), maintaining their current investment and growth plans (45%), and the impact of staff (35%) and energy (33%) costs as the main concerns anticipated for the coming year.

As in past waves of the Digital Economy Monitor, engaging with consumers/prospective customers (58%) and introducing new products or services into the market (38%) remain the most important priorities for techUK members during the next 12 months, however both have declined in importance over time, from 75% to 58% and 55% to 38% (as can be seen in the graph below).

This decline has resulted in a shift in priorities, with more members than ever before expressing that they will prioritise review operations and business efficiency (31%). This has also meant that training personnel to acquire new has fallen in the ranking of priorities, from third to sixth in one year, and with only 13% of members indicating this is a priority for them.

Faced with the current economic conditions and with a shift in business priorities, techUK members are planning to deal with increased costs by passing on costs to costumers (46%), reducing “non-essential” spending, such as training or marketing costs (32%) and by cutting off profit margins (26%). However, a considerable number (40%) say they want to branch out into new, higher-margin markets or products to deal with increased costs.

techUK members are also providing staff with extra flexibility and raising salaries to help them mitigate cost of living pressures: when asked how techUK members are helping their staff cope with cost-of-living pressures most (63%) said they were allowing staff to work more flexibly so they can manage costs better, such as transport, childcare, food, energy and 47% said they were increasing staff pay.

The government can play a critical role in aiding the tech sector in meeting its investment and growth goals. When asked what action the Government could take to help tech businesses manage the current crisis, members said that placing a cap on energy prices for businesses similar to the one that exists for households (42%), reducing business taxes, such as corporation tax or business rates (40%) and creating incentives such as a tax credit help companies invest in new technology and the retraining of staff to increase productivity (40%) should be the government's priorities.

When asked what would improve the outlook for tech businesses in the long run, for the third time in a row, members highlighted that increasing support for R&D and innovation (41%) would help the industry continue to expand. Members have repeatedly pointed out that the sector's progress has been hindered by the lack of access to skills and talent, with 35% of members saying that they need better access to overseas talent and 29% saying that better training and skills support would improve the tech sector's outlook. 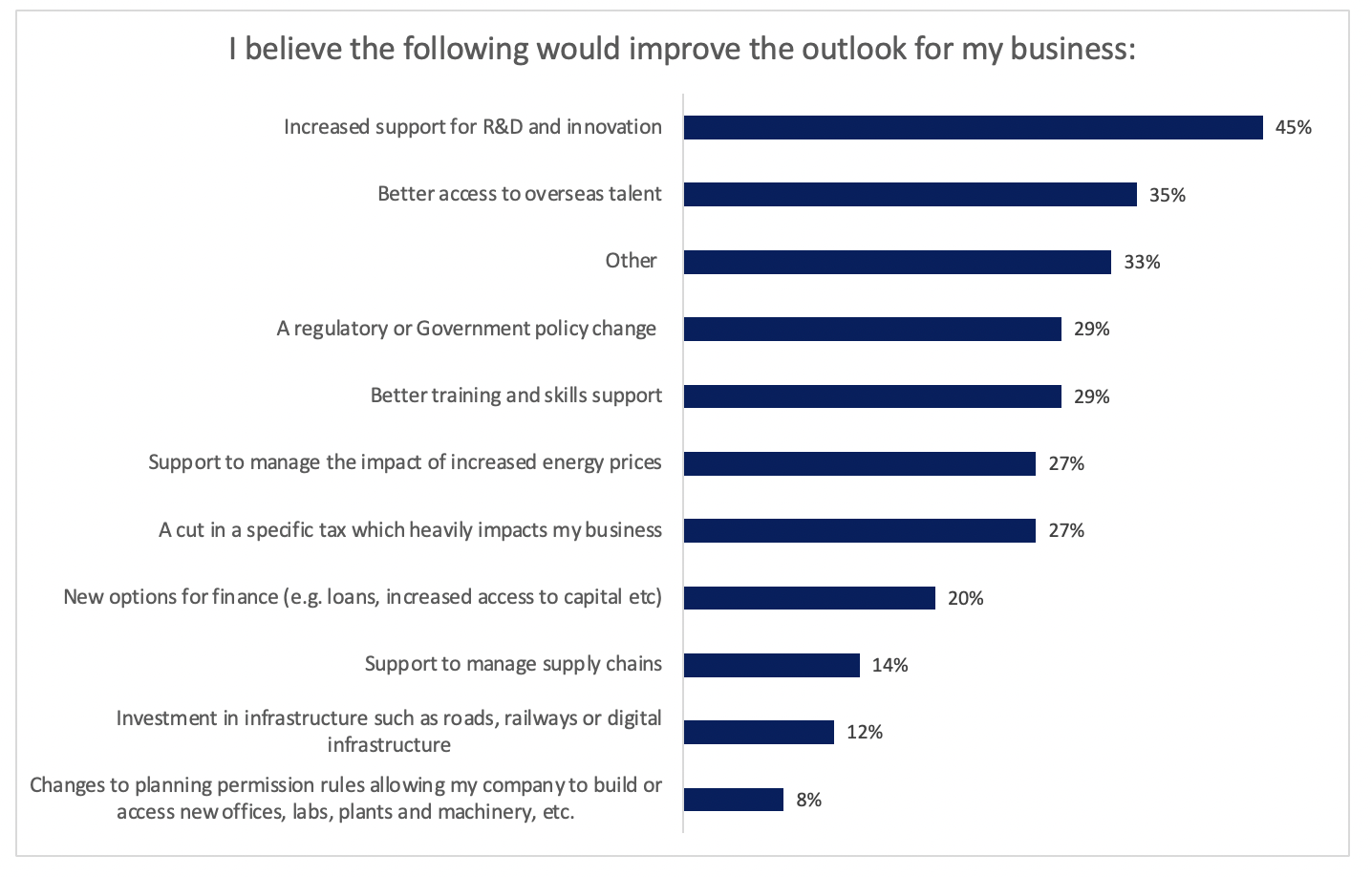 In addition to the recommendations raised above, when members were asked to be more specific about whether the government could do one thing to help your business, they were in favour of seeing a more active role from government in fostering innovation through public procurement and pointed out that regulatory certainty is a key driver of demand and stability, and that contradictory regulations or differing approaches may occasionally frustrate growth plans. These concerns may stem from delays on key bits of Government legislation such as on data protection, online safety and competition policy. As well as growing security requirements for telecoms providers and concerns over divergence over regulations between key markets.

The Digital Economy Monitor is a survey of techUK members. In this wave of the survey, 75 companies from the industry participated. 39% of respondents were large firms and 61% SMEs. The data was collected from September 6th to October 14th, 2022.