The Digital Economy Monitor is a new regular survey by techUK to measure and track operational changes, perceptions and prospects for the UK economy among the tech sector.

According to our third-quarter 2021 results, the tech sector is ready to play a part in the UK economic recovery, with tech companies exhibiting strong overall sales performance, increased investment plans, and strong desires to expand their headcount in the UK.

However, this optimism is balanced by concerns about skills and labour shortages as well as the impact of supply chain disruptions.

Commenting on the results Neil Ross, Head of Policy at techUK said:

"Overall techUK members have weathered the impacts of a year of economic uncertainty. A pivot to digital across the wider economy and demand for investment in digital transformation and Environmental, Social and Governance (ESG) services is driving demand in the sector, highlighting the UK tech’s key role in supplying the productivity boosting technology that will underpin the UK’s wider economic recovery.

However, access to talent and concerns around supply chain disruptions are preventing tech companies from expanding as fast as they could with negative consequences for the wider growth. Government and the sector will need to work together to unblock these bottlenecks if the UK wants to use tech to underpin the Prime Minister’s plans to build back better."

Sales performance: Members that responded the survey had good overall sales performance in the last 12 months. When asked if their sales had increased from the previous year to this date, 63% said they had, with 25% saying they had increased "significantly". However, a sizable percentage of the respondents (27%) reported that their sales had not changed from the previous year and 10% reported a decrease in sales.

Headcount projections: Members who responded to the survey showed convergence with government's plan for growth and a desire to contribute from the private sector, with 69% stating that their plans to expand their headcount in the UK have increased in the last 12 months, and 24% stating that their plans have increased "significantly." A significant proportion of respondents (29%) stated that they plan to keep the headcount in the UK roughly the same as it is. Just a small fraction of respondents (2%) stated that they aim to decrease headcount in the UK. 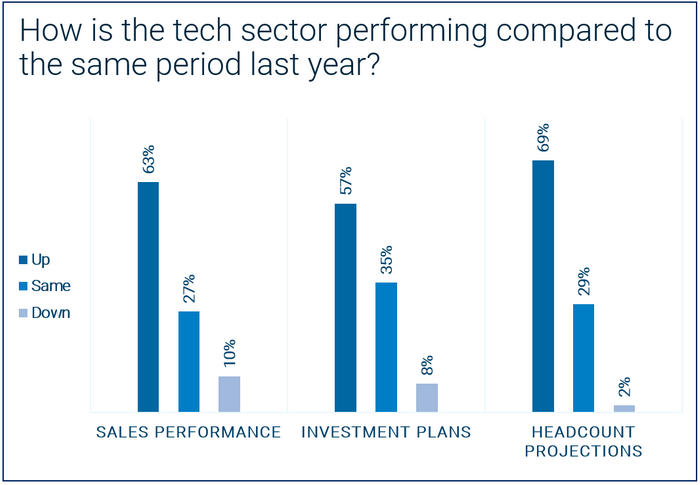 When asked how the sector will look in the next 12 months, members were optimistic about the sector’s ability to generate growth, with 77% responding that the outlook for businesses in the tech sector will improve, however most of member expect this improvement will be “moderate” (55%).

Members who are less optimistic about the sector's future in the next 12 months (20% that believe it will remain the same and the 4% that believe it will deteriorate moderately) stated that shortages of skills and talent, the effects of Brexit, and the ramifications of Covid-19, particularly in terms of supply chain shortages and the uncertainty of future lockdowns, will slow the sector down in the coming months. 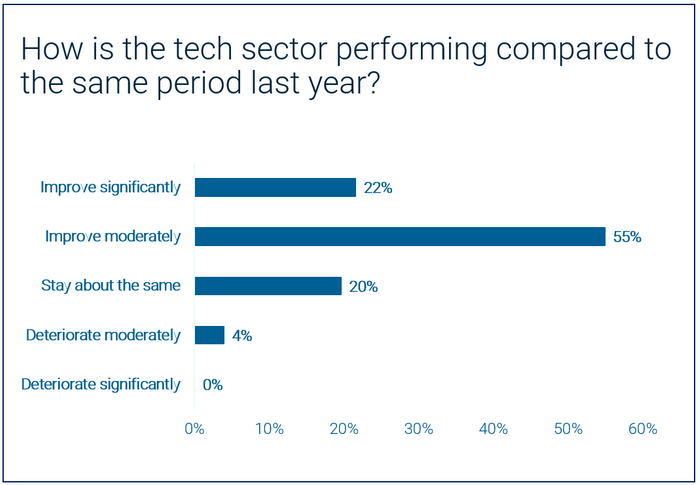 When asked about their priorities for the next 12 months, most of members indicated that they will prioritise to engage with customers/prospective customers (75%), and introduce new products or services into the market (55%). Members also stated that one of their top priorities for the next 12 months will be to focus on their employees so that they are better prepared to face future challenges and achieve increases in productivity, with 25% of members responded that they will emphasise training personnel to acquire new skillsets.

How can the government aid the tech sector in achieving their ambitious goals?

The government has a significant role to play in supporting the tech sector in achieving its goals and addressing its concerns. When asked what would enhance the outlook of tech businesses, members said that increasing funding for R&D and innovation (39%) would help the industry continue to expand.

Members also stressed the significance of getting the necessary skills and talent, and how this may be a roadblock to the sector's progress. For example, 29% said that better training and skills support would improve the tech sector's outlook, while 27% said that better access to overseas talent would. 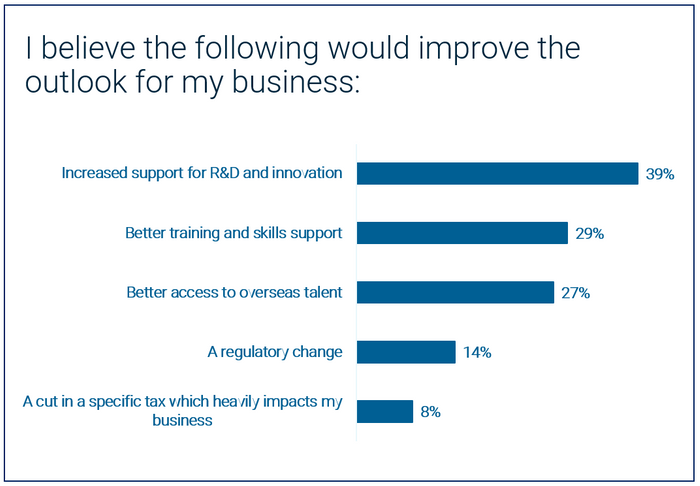 When members were asked to be more specific in answer to an open question about whether the government could do one thing right now to help your business succeed, they responded with a wide range of options:

Improve supply chain resilience: Members emphasised the necessity of the government working with businesses to establish longer-term plans for more robust supply chains, such as encouraging semiconductor investment in trusted partner nations (including the UK) and incorporating this into trade agreements.

Address labour shortages and help mitigate the impacts of Brexit: Members want the government to do more to alleviate HGV and workforce labour shortages, such as improving the talent and skills pool, establishing a more favourable climate for hi-tech professionals to return to the UK, and providing grants for recruiting more people.

Support the internationalisation of key technologies: Members emphasised the necessity of establishing a stronger framework for trading and sharing key technology such radio spectrum and quantum technologies, and called for the government to work with other nations on digital regulatory cooperation.

Targeted government support to businesses: Members highlighted the importance of the government providing resources in key areas that can enhance innovation and digital adoption in the UK economy, such as further encouraging R&D and innovation through additional R&D tax credits, making good on its target to spend 1/3 with SMEs, providing resources to accelerate the transition to a low-carbon economy, and expanding the scope of the Help to Grow scheme. 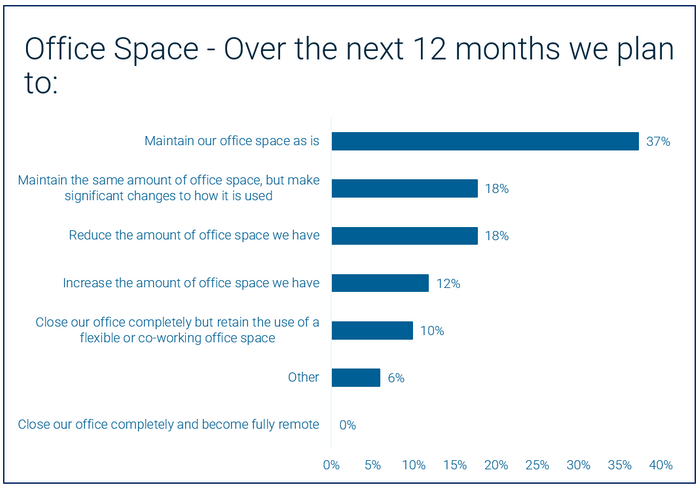 A small percentage of members (12%) said they will expand their office space in the next 12 months, owing to a desire to make a big investment in their workspace. On the other side, only 10% indicated that they plan to close their offices completely but retaining the use of a flexible or co-working office space, driving by new working from home schemes and cost reduction. No member plans to close their offices and go totally remote in the next 12 months.

Members anticipate that the sector's work dynamics will change significantly in the long run. Over the next 2-5 years 55% expect the sector to hire more staff to work from home on a permanent basis, 53% expect tech businesses to reduce their overall office space, and 35% expect more companies to hire more staff based in other countries and allow them to stay there while working for UK tech companies.

The DEM is a techUK survey of members and companies in the tech sector. In this round of the survey, 51 companies from the industry participated. 49% of respondents were large firms and 51% SMEs. The data was collected from October 15th to November 15th, 2021.