This article was written by Yatin Mahandru, Head of Public Sector and Health, Cognizant UK & Ireland. To learn more about Cognizant, please visit their LinkedIn and Twitter.

A furlough scheme rolled out in less than a month. A nationwide vaccination programme set in motion faster than in any other country. Faced with the existential threat of a global pandemic, the UK Public Sector moved with unprecedented speed to protect people’s lives and livelihoods.

Now that the worst of the pandemic is behind us, can – and should – the Public Sector maintain that pace of innovation and delivery? And if so, what needs to change on the technology front to keep government firing permanently on all cylinders?

I was delighted to have the opportunity to discuss these topics with Charlie Boundy, Head of Data Science at the Department for Work and Pensions (DWP), during a fireside chat at the 4th Annual Public Sector Innovation Conference organised by Digital Leaders. 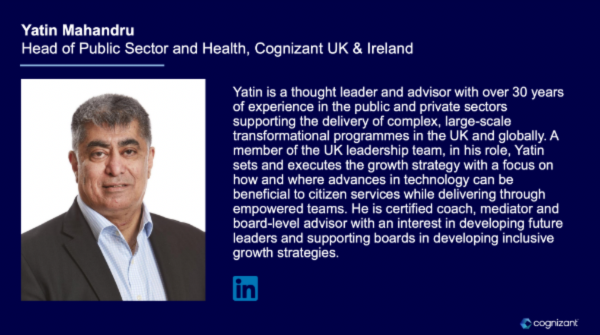 We spoke about the role of data, cloud, AI and skills in enabling the Public Sector to respond quickly to foreseen and unexpected challenges. Here are my five takeaways:

1. Government must stay nimble to address new and serious threats

The biggest threats posed by the pandemic have receded, but that doesn’t mean government can rest easy. There are very serious issues that need tackling now – the unfolding energy crisis, the impacts of the war in Ukraine, and the rumbling undercurrent of the climate crisis.

Charlie voiced some optimism that government would not retreat into “risk-averse silos” following the pandemic and leave organisations on the back foot in meeting these challenges. From our work across various Public and Private Sector organisations, I see there is a risk but with some encouraging trends. We’ve found that citizens are now more open to sharing their data with the NHS, for example, as they can see there is a benefit to improving their wellbeing.

2. Data sharing is key to agility and responsiveness – but barriers remain

But while individuals are becoming more amenable to their data being shared between providers of public services if it’s in their interests, resistance to data-sharing across government departments remains.

At DWP, like most departments, data-sharing initiatives tend to be bilateral and agreed upon individually between specific departments. While there are frequent explorations around broader data-sharing platforms (like data lakes or data exchanges), an abundance of caution – not to mention challenges around interoperability – means they’re not yet widely adopted.

According to Charlie, narrow legal gateways hamper the deployment of initiatives that could make things materially better for many people across the country. Where two or more departments have a need to collaborate over different sectors, locations or disadvantaged groups, for example, this needs complicated legal workarounds at best...

3. Cloud is essential for data sharing, and acceptance is growing

Much of the caution surrounding data sharing is a continued reluctance (in some departments) to move data to the cloud, where it can more easily be made discoverable and accessible. Anxiety ranges from a fear of vendor lock-in to concerns around data security and compliance.

But these worries are dissipating. At Cognizant we are seeing the UK Public Sector shift towards embracing the cloud, and Charlie says DWP have also overcome its initial cloud scepticism. (The key, he says, was to “lock a CIO and other risk management folks into a room” to thrash out a commitment.) The reluctance was understandable as DWP handles very sensitive personal data, but the billions of dollars the hyper scalers invest in security mean data is as safe in the cloud as it possibly could be.

That’s why Charlie says, it also makes sense to think in terms of being cloud-native rather than seeing the cloud as a data centre. Building for the cloud means the government can take full advantage of those layers of security, as well as the advanced analytics and data management capabilities of public cloud platforms. And as the hyper scalers realise they’re forming the “backbone of transactional government”, Charlie believes that we’ll see them needing to work together more closely to ensure interoperability between their platforms.

4. AI will deliver value only when the data and ethics frameworks are right

As DWP’s Head of Data Science, you would expect Charlie Boundy to have an opinion or two on AI in government. And he does – including the fact that AI is not a very useful term. “In some contexts, it’s just used to sell something that really isn’t AI, in others it’s got the broadest possible definition – some [legal definitions of] algorithms could be any computer program ever written!”

But in essence, like us at Cognizant, Charlie believes that any government organisation needs to address several factors before embarking on large-scale AI initiatives. For starters, making sure data is the right fit, as it’s usually been gathered for other purposes. Also, being very clear on the ethical basis for the initiative, DWP for example will not be using AI to automate decisions regarding payments. Therefore being as transparent as possible about what the AI is doing, how it’s doing it and why is vital.

This is why we advise our Public Sector clients to focus on modernising data and ensuring unconscious biases are measured and minimised before releasing their AI-based initiatives. Failure to get those foundational elements right risks preserving and deepening harmful biases, rather than transforming public services for the better.

5. A more diverse approach to digital skills is needed

Lastly, Charlie invited me to suggest what government could do better in the way it works with partners like Cognizant.

For me, it comes down to looking beyond individual projects and contracts and thinking more holistically about who’s building the technology, what it’s intended to achieve and who it’s intended to benefit. I believe the government needs to widen its net on digital skills, not just because existing talent pools are too small, but because they often don’t reflect the diversity of the UK population.

Here at Cognizant, for example, we’re working with CodeVerse to teach kids from under-represented backgrounds to code and bring them into the Cognizant talent pipeline. Initiatives like this will extend opportunities to groups that have historically been excluded and create a deeper talent pool for government to draw on, in a time of scarce digital skills.

To read more from #techUKDigitalPS Week, check out our landing page here.

Thanks to Charlie Boundy and Digital Leaders

I’d like to extend my thanks to Charlie Boundy for making our fireside chat so interesting – and to Digital Leaders for bringing us all back together in the real world – at last – for an outstanding Public Sector Innovation Conference. If anyone would like to follow up on any topics aired at the conference or in this blog, please do get in touch.

On Tuesday 5 April, techUK was delighted to host the Cabinet Office and industry representatives for the launch event for the UK Government’s Digital, Data and Technology Sourcing Playbook which was published on 28 March 2022. The DDaT Sourcing Playbook sets out guidance – in one place – as to how digital projects and programmes are assessed, procured and delivered in central government departments, arms-length bodies and the wider public sector. Through the application of what is commercial best practice, the Playbook addresses 11 key policies and six cross-cutting priorities that will ensure government gets things right from the start when it comes to procurement.

You can watch the recording of the launch event in full here: 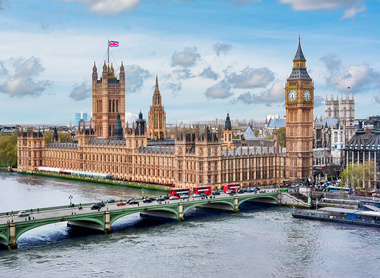 techUK's Government Group is our thriving community of 500 tech suppliers to Government. The group is composed of companies of all sizes, from new entrants to some of the biggest companies in the world. Group members receive our govtech market intel, and opportunities to engage with Government to understand their requirements and explore how tech can help meet them. If you're a techUK member working with Government to transform the delivery of our public services then this is the group for you.